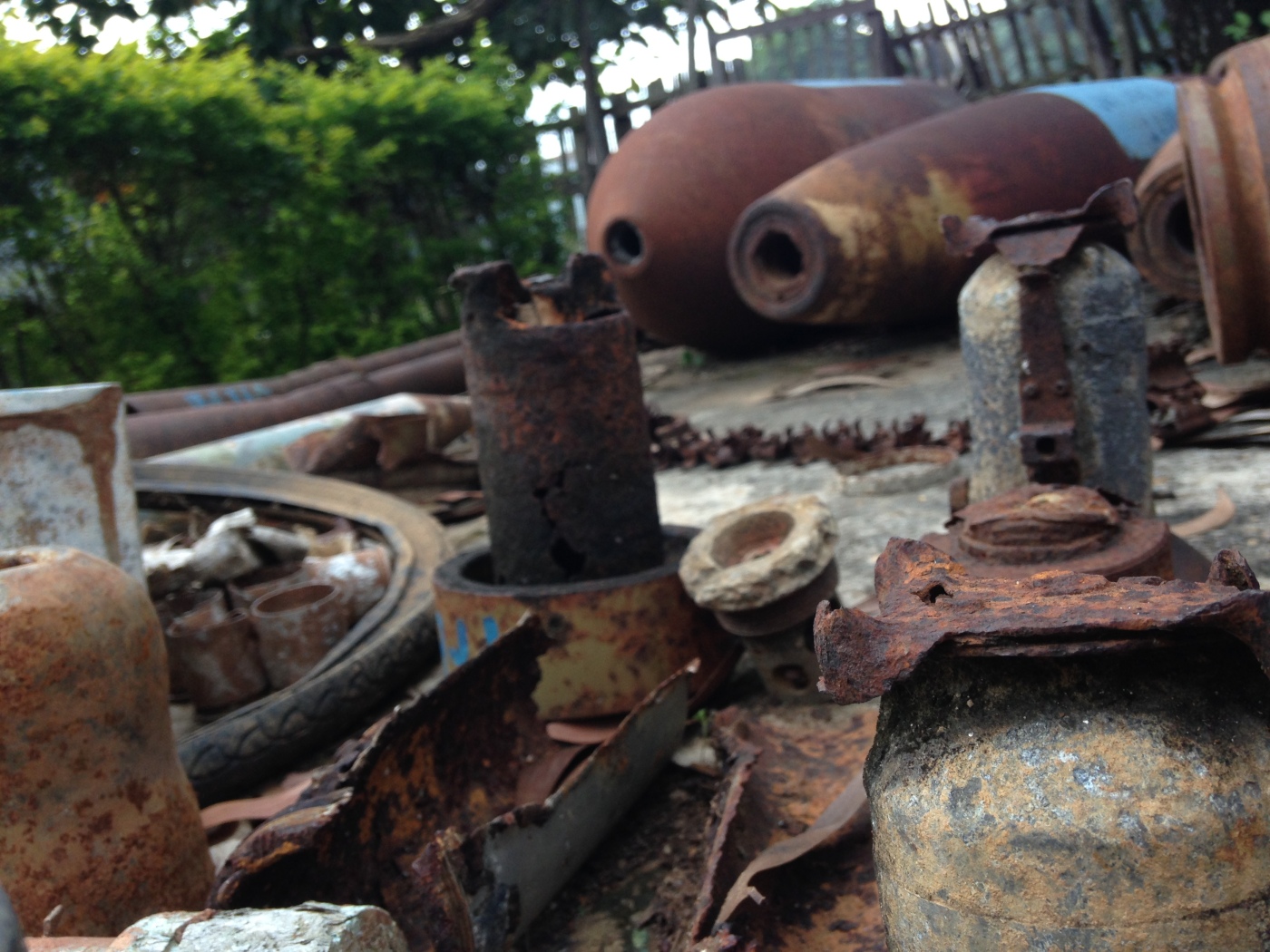 On Wednesday, our country decided that bombs were the answer to terrorism and so began the air strikes in Syria. David Cameron was quick to warn us that the bombing campaign will be complex and that “this is going to take time”. Following my recent trip around South East Asia, I want to talk about another bombing campaign that “took time” indeed… by this I refer to 9 years of non-stop bombing and a country that is still on its knees 50 years on.

Ask one of your mates about Laos and chances are you’ll get something along the lines of the Buddhist monks in Luang Prabang or a boozy anecdote involving one too many shroom shakes whilst tubing down the Mekong in Vang Vieng… maybe throw in a few waterfalls. What is less likely to come up is the fact that Laos is the most heavily bombed country, per capita in the world. Yes, little sleepy rural Laos, with a total population that is half the size of London was subject to what eventually became a total of 580,000 US bombing missions from the start of the Vietnam War in ’64 after the Viet Cong rebels decided to set up bases there. Dropping bombs with a disregard for the lives, safety and land of innocent people to get at the rebels in hiding… sounds familiar doesn’t it?

The loss of innocent lives that these bombing missions will undoubtedly cause in Raqqa and wherever else ISIS decide to set up camp are as tragic as the deaths that occurred when US bombs hit Laotian soil from 1964-73. But what I want to talk about is the reality of what follows when these bombs don’t go bang, and how one country’s decision to bomb another has cost it its future and creates new victims every day, generations down the line…

I’ve been walking around with the Katu tribe’s village joker Mr. Hook. He is the self-proclaimed playboy of the Kok Phoun Gtai village. We’ve left the huts and the children behind us, passed through the rice paddies and crop fields and now we stand with just a vast expanse of wild grassland in front of us. I wonder why we’ve stopped, and then Hook shows me. Buried in the overgrown foliage lies one of 80 million UXO (Unexploded Ordinances) that still exist in Laos today. We’ve walked right up to the border of what I later know to be a ‘contaminated zone’. Hook’s words are simple: no one goes past the ‘bombie’. All that land beyond it. No one walks on that land, no one farms that land, no one builds houses on that land, no one constructs schools on that land, no one sets up clinics on that land, no one invests in that land, no one profits from that land. The only thing that that land offers anybody is fear and frustration for all those in desperate need of such opportunities and services. Without realising it, Hook has led me to into a true microcosm of the effect that bombing has had on the hopes and development of his country.

Over 200,000 hectares of Laos’ prime agricultural land is classified as ‘heavily contaminated’ with a quarter of all villages in the country facing ‘severe restrictions’ due to bombs. This is all due to America’s use of cluster munitions (referred to by Hook and all Laotian people as ‘bombies’) which were also used by the UK prior to developing the Brimstone missile that we’re now dropping on Syria. Cluster munitions spray a shower of smaller bombs which are theoretically meant to explode upon impact. Theories aside, the reality is that a far too many didn’t. In total, almost a third of the clusters failed to detonate, leaving the country riddled with active ‘bombies’. The result of this has been over 20,000 injuries and deaths… and that’s all after the war ended. Throughout my travels in Laos, you hear stories from each and every village: the blind man who lit a fire outside and detonated the UXO hidden under the earth, the amputee who hit a ‘bombie’ whilst hoeing in the paddy field, the little girl who was blown to pieces playing with what she thought was a toy. You hear about the school boys who buy $5 metal detectors and go searching for bombs to sell as scrap metal to black market Vietnamese dealers. For each handful of them who take a few extra kip to their families, there’ll be one who is taken to hospital without a hand. In every village, the chances are you’ll find someone who has lost a child or a sibling or a parent or a friend. And above all, in every village you’ll find fear. People are scared to leave the trodden path as to do so is to risk your leg. And it you live in this kind of world, how can you possibly move forwards?

80% of Lao’s industry is agriculture and people simply cannot extend their farms. When a bomb washes up in the school playground, school closes until it is deactivated. Such basic infrastructural advancements as the building of new roads is painstaking, costly and always risky. For this country, careless bombing has halted all progress. Hook and his village are still standing and waiting for that team from MAG (Mine Awareness Group) or UXO Laos to clear their land, and that’s not to criticise their amazing work. A bomb disposal team takes at least one day to safely diffuse a bomb… one bomb down, 80 million to go. The mission is as close to impossible as it gets with estimates that at the going rate, it will take over 2 millennia to clear Laos of all bombs. Like its countless victims, the effect of air-strike bombing has left Laos’ future severed and its hopes amputated.

I hope no other country has to suffer the long-term effects of bombing which will continue to plague Laos for well beyond our lifetimes. I also hope that as we enter this bombing campaign in Syria, we bear Laos’ sad story in mind and refrain from making the same mistakes. A victim isn’t just a tally on a newspaper story, or a statistic on the BBC… a victim is a long line of generations who are left feeling scared to take a step further than the confines of their village.